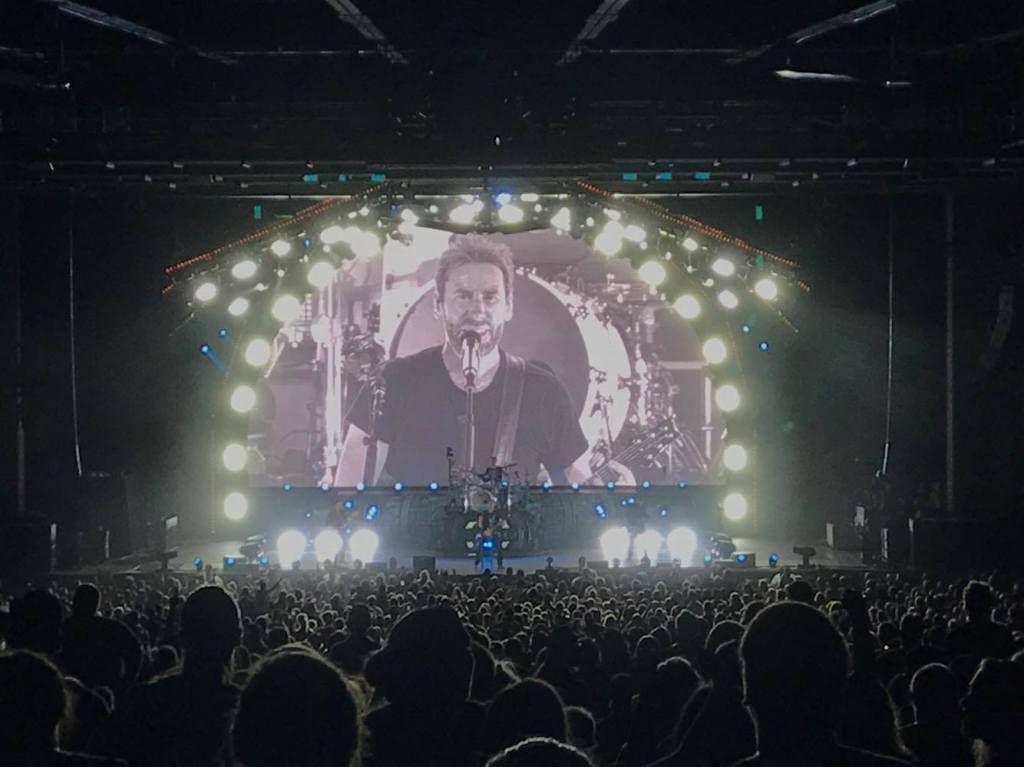 Nickelback is one band that’s always intrigued me. Last night, after over fifteen years of love-hating them, I finally had the opportunity to catch a show. Ak-Chin Pavilion. Phoenix, AZ. A beautiful, warm and breezy Saturday night with Nickelback. I went solo as I wasn’t able to stir up much interest from any show buddies. No distractions, no one to bother me. Not a single Nickelback fan said a word to me all night – noticeably different from the shows I’m used to attending. Just me, tens of thousands of idiots and Nickelback. I couldn’t have had a better time. These Canadians put on one awesomely mediocre (sh*t)show for a packed house of Arizona’s best. Let’s get into it.

I was late. I hate to say it, but I caught my first Photograph from the box office. I couldn’t believe it – they came out swinging, brought the heat and dropped one of their biggest hits in the three-slot. It made me laugh. After Photograph, Chad Kroeger (guitar/vocals/Jager bombs) made sure the crowd knew that a friend of his, who plays in the NHL, lives in town and that he’d be heading over there after the show to indulge and ‘probably die in his swimming pool.’ I was impressed by Chad’s stage banter throughout the night – unparalleled etiquette. They followed Photograph with a song that sounded a lot like Photograph before stumbling into one of my favorites – Too Bad.

The guys continued to loudly trip through a few more stripper-rock jams before landing on a (mostly) crowd sung version of Hotel California. (See the tape below. Build your own opinion.) After somehow making a whole bunch of people who can’t sing, sing The Eagles’ classic, Chad and the boys brought up a local teacher and one of her students. The deal was that if the students could get said teacher to meet Canada’s finest, they wouldn’t have to take a test. Chad cares about the kids, so Chad obliged. As this terribly nervous lady and teenager made their way to stage, Chad noted that he couldn’t tell which one was the student. After deciphering the two, he promptly invited the teacher (not the 14-17 year old) to the bus after the show. He also let the teenage girl know that her mom was a MILF. Typical Saturday night 5Back. Just guys bein’ guys.

After these two nervous fans whisper-sang a pretty bad version of an already unlistenable song, Rockstar, Chad made sure they GTFO the stage. The one set show continued with an epic When We Stand Together followed by a sloppy Something in Your Mouth. While sloppy, Something in Your Mouth definitely recharged the crowd and had all of us on our feet for the rest of the evening. ‘All of us’ may be a stretch; there were plenty of Nickelheads drunkenly passed out and falling over on the lawn. I watched as one love-struck couple held hands and dragged one another to a fence so they could throw up together during ‘Animals’. The band closed the one set show with what Chad referred as ‘our Hotel California’ – How You Remind Me. I actually kind of dug it.

I made my way out of the packed venue just before the encore. Luckily for me, Ak-Chin Pavilion is set up so I could hear my last Chad clearly from the lot. As I sat in my car, I thought more about what I’d just experienced. Chad Kroeger repeatedly referred to himself as ‘Daddy.’ (he made clear that he is not a father) He said things like ‘Daddy needs a drink’, ‘Daddy needs his medicine’ and ‘The train stops when Daddy doesn’t get his medicine.’ He downed Jager bomb after jaeger bomb and became more and more creepy as the night went on. I can’t say for sure, but it seems that rhythm guitarist/keyboardist, Ryan Peake, is the brains of the band – while Chad manages to be the face, dick and asshole all at once.

One note about Nickelback’s lyrics. These words struck a chord with me. A really bad chord. Chad and Co.’s lyrics are not the soul-searching and thought-provoking lyrics of Paul Simon, Paul Hoffman or John Bell, these songs are all about tits, strippers, getting drunk, prostitutes, being a ‘rockstar’, putting it in your mouth and of course, that Photograph. I realize that a lot of musicians sing about what they know, but I’m hopeful that one day they will step out of their comfort zone for an album, or even just a song.

I will give it to them. Nickelback has found a formula that works. That formula is playing essentially the same song over and over, with different lyrics about the same things. If you like one Nickelback song, there’s a good chance you’ll dig their entire catalogue. I suppose that’s Chad’s genius.

I’d suggest everyone check out a Nickelback show, but I’d rather nobody give them any more money.

Feed the Machine, Woke Up This Morning, Photograph, Far Away, Too Bad, Someday, Lullaby, Savin’ Me, Song on Fire, Hotel California(1), Rockstar, When We Stand Together, Something in Your Mouth, Animals, Figured You Out, How You Remind Me

Encore – Gotta Be Somebody, Burn It to the Ground

iThere are no comments

Begin typing your search above and press return to search. Press Esc to cancel.